Food for People with Chronic Pancreatitis and Elderly People Pancreatitis means the inflammation of the pancreas. A proper diet for pancreatitis is really difficult to establish. ...

Pancreatitis means the inflammation of the pancreas. A proper diet for pancreatitis is really difficult to establish. The pancreas is the organ that produces enzymes, which brake down food, during digestion.

Besides helping to digest foods the pancreas also produces insulin. People who have Pancreatitis suffer from the problem of the enzymes produced by the pancreas, which don’t reach the stomach to digest food, but digest their own organ instead, the pancreas.

One of the solutions for this problem is to cut the intake of oils and fatty foods. According to clinical researches, many people feel better after switching their regular diet to a low fat one, eating smaller portions (about 1oz maximum at the time), more often throughout the day.

It is also important to avoid alcohol and foods made with alcohol. Include fruits, vegetables, whole grains, low or non-fat dairy to your daily diet. Also eat protein with every meal, like lean beef, chicken without skin, fish, beans, soy etc.

The pains caused by the consumption of certain food are due to the pancreas having inflammations, also known as “fibrillation”. With each inflammation the organ shrinks.

Fortunately there are some simple means to prevent such discomforting symptoms that result from eating the wrong food.

Consume the foods that do not stimulate pancreas to produce too many of enzymes which lead to its dysfunction. One should consume foods that are nutritious and easy to digest.

Most of the above mentioned foods are also suitable for the diet of elderly people.
When the pancreas inflames, it can help to do a short period of fasting to calm down the organ or try to consume liquefied food. The best way to liquefy you foods is with a blender or a juicer.

However to prevent weight loss and promote the proper function of the organs, you need to consume enough calories from carbohydrates and proteins. These should come from non-fat foods that are easy to digest.

People who have diabetes should always pay attention to the calories they eat and follow the amount of calories suggested by their physicians.

The recipes in this book for pancreatitis are only suggestions. Their main goal is to minimize the amount of fat and oil consumed with food. The recipes are also intended to be a guide for choosing ingredients that are easier to digest. Aside from that they are also examples for consuming the right amount of protein and other nutrients to build up muscle and organ tissue.

However, in the case of pancreas inflammation one should reduce the amount of proteins derived from milk products, such as cottage cheese, non-fat cream cheese, because these are harder to digest compared to other ingredients.

These recipes cannot replace the advice and treatments from your medical physician.

Food for People with Chronic Pancreatitis and Elderly People Pancreatitis means the inflammation of the pancreas. A proper diet for pancreatitis is really difficult to establish. ... 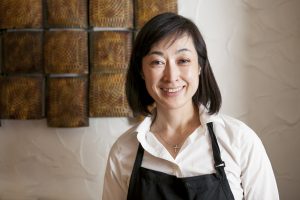 Executive chef Mie Okuda has been studying nutrition for the past 30 years.
Her restaurant Momokawa on east 28th St. has grown popular over the past few years and is one of only a few Michelin recommended restaurants in Midtown Manhattan. 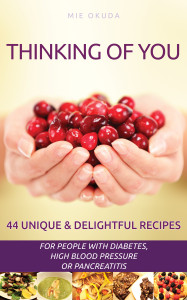 You can substitute squid ink handmade pasta with store bought one and cut the cooking time. Serves 2 For pasta 1 cup of semolina flour (1/2 cup Bread flour and 1/2 cupall purp ...